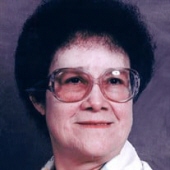 Gloria Salazar, the daughter of Andreas and Manuela (Alonzo) Salazar was born October 17, 1933, in Sonora, TX. She was raised and educated in Carrizo Springs, TX. On August 30, 1953, she was united in marriage to Johnnie Rodriguez in Moorhead.

They lived in Carrizo Springs until moving to Sabin, MN, in 1969, where Johnnie worked for Henry Schroeder. In 1975, they moved to Moorhead. Mr. Rodriguez died December 21, 2006.

Gloria was a member of St. Joseph Catholic Church in Moorhead. She will always be remembered as a loving and understanding lady who could always make people laugh. She and Johnnie were always charitable and willing to help people in need. Cooking was something she always enjoyed.

She was preceded in death by her parents; husband, Johnnie; daughters, Blanca and Melinda; and infants, Jesse and Joseph.

A gathering of friends for Gloria will be one hour prior to her memorial service.

Her Memorial Service will be Wednesday, October 21, 2015, at 2 PM in Korsmo Funeral Chapel, Moorhead.

To order memorial trees or send flowers to the family in memory of Gloria Salazar Rodriguez, please visit our flower store.