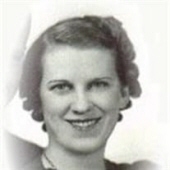 Gladys Marie Markegard was born December 16, 1917, in Moorhead, MN, to Alfred Ole and Jennie Othilia (Johnson) Markegard. She was baptized February 12, 1918. Gladys was raised in Moorhead where she attended high school. For a number of years, Gladys worked at Bill's Club, Moorhead, and as a housekeeper for the Herbert Goldberg family in Moorhead.
On October 7, 1941, Gladys married Lawrence Carl Peterson in Moorhead and they lived and farmed south of Moorhead. During that time, Gladys worked at Ernie's Market, Moorhead. After they retired in 1970, they moved into Moorhead where they lived until Lawrence's death on February 9, 1980. She remained in Moorhead until moving to Houge Estates Assisted Living, Dilworth, in 2002. Gladys entered Rosewood on Broadway in August of 2003, where she died Tuesday, December 9, 2003, at eighty-five years of age.
Gladys is survived by her one daughter, Sharon (Ronald) Sall, Moorhead; one son, Larry (Jean) Peterson, Moorhead; four grandchildren; two great-grandchildren; one sister, Mary Jane Dickelman, Moorhead; and one brother, Clarence (Jean) Markegard, Moorhead.
Visitation: one hour before the funeral at the church

To order memorial trees or send flowers to the family in memory of Gladys Peterson, please visit our flower store.