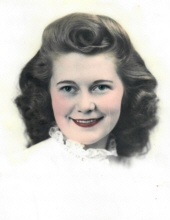 Geralene Lindquist, the daughter of Allen and Florence (Still) Johnson, was born June 1, 1925, in Buffalo, ND. She grew up on a farm outside of Buffalo and graduated from Buffalo High School in 1943. During this time, she loved to attend dances in the surrounding towns, particularly when her future husband, Dale, was playing saxophone in the band. Dale Lindquist and Geralene Johnson were married in Tower City, ND, on May 29, 1943.

While Dale trained for the Marines in North Carolina, Geri lived in New Jersey, supporting the war effort assembling the nose cones for bombs. Dale soon deployed as Marine Lieutenant in World War II, and Geri moved to Fargo, ND. She gave birth to their first and only child, Terry Lindquist, on October 5, 1945. For many years after, Geri lived in the Fargo-Moorhead area, working as a bookkeeper for her husband’s private CPA practice. Geri and Dale would work tireless hours, often pulling all-nighters, just to spend a few extra days at the lakes in Minnesota or take trips to visit their son and grandchildren.

In the early 1990s, Dale came down with Alzheimer’s disease, and Geri dedicated the next ten years of her life providing him with amazing and loving care until his passing on February 3, 2001. She loved listening to music and dancing, playing cards, and was known for keeping an immaculate household. At the young age of 80, she became an avid North Dakota State Bison Football fan. Geri moved to Wahpeton, ND, in 2017, to be near her son, and later to Redmond, in 2020, to live with her grandson after her son passed away.

To order memorial trees or send flowers to the family in memory of Geralene "Geri" Lindquist, please visit our flower store.