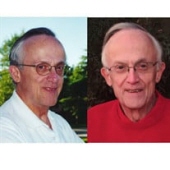 George Arthur Fevig, 73-year-old husband, father, grandfather and friend, passed away in Fargo, ND, on Sunday, November 29, 2015, surrounded by his loving family.
George Fevig, son of Arthur Clarence and Ruth (Williamson) Fevig, was born in St. Luke's Hospital in Fargo, on June 26, 1942. He grew up and received his early education in Moorhead, MN. After attending high school at the Moorhead Teachers Campus School, George attended Concordia College in Moorhead where he graduated with a bachelor's degree in business administration in 1963, after which he earned an MBA from the University of Chicago.
In 1964, George met Scheryl Jeanne Schmidt "Sherry" from Lakefield, MN. They were married in rural Rost Township in Jackson County, MN, on June 19, 1965, at St. Paul Lutheran Church. George and Sherry moved to Bloomington, MN, where they raised three girls, Elizabeth, Kristine and Gretchen.
After serving his country in the United States Air Force, George held many positions of accounting including most notably Ernst & Ernst, Tonka Toys, Dominos Pizza, and Lutheran Social Services of North Dakota. He also taught accounting at Augsburg College.
Although the family made homes in Bloomington, Plymouth, MI, and most recently in Fargo, the place George loved the most was their family cottage on Lake Melissa outside of Detroit Lakes, MN. George's father, Art, built the cottage in the 1950s and George developed a love of fishing and lake activities. Whether it was sailing with his Shoreham friends, spoon plugging through his favorite fishing route, putzing in the garage, working on his computer, teaching all of the kids and grandkids to waterski, captaining the pontoon on the 4th of July, or spending time reading mystery books and napping in the hammock, George loved the lake. Winters back in Fargo were also full of activities. George would print out the weekly schedules of his grandchildren's sporting events, aligning his time to attend as many as possible.
Those who remember George will remember a soft-spoken, kind man who was loved by all, loyal to his family and strong in his faith. He and Sherry attended Trinity Lutheran Church in Moorhead.
George was preceded in death by his parents, Arthur and Ruth Fevig of Moorhead. He is survived by his wife, Scheryl Fevig, Fargo; their three daughters, Elizabeth Ann Olson, Kristine Fevig (Pat) Christensen and Gretchen Margaret (Mark) Noah, all of Fargo; and nine grandchildren, Todd and Abby Olson, Grace and George Christensen, and Maggie, Kelly, Mary, Markie and Katie Noah. They loved their Grandpa so very much.

To order memorial trees or send flowers to the family in memory of George Fevig, please visit our flower store.