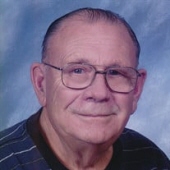 Gene Halverson, 81, Moorhead, MN, died Tuesday, Jan. 24, 2017, at Sanford Health, Fargo, ND.
Gene, the son of Orris R. and Aileen (Nicholas) Halverson, was born in Fargo, on April 1, 1935. He grew up and received his education in the Felton, MN, area. Gene served his country in the US Army and was honorably discharged in 1957.

Gene made his home in Moorhead, and worked at the FM Hotel in downtown Moorhead. He was united in marriage to Elaine Grahn on April 20, 1959, in Moorhead, where they have lived since.
Gene worked for 23 years as a delivery driver for Stenerson Brothers Lumber in Moorhead. He also worked for Clay County, and for IDA, until retiring in about 2000.

The funeral service for Gene will be held Monday, Jan. 30, 2017, at 1 PM, in Our Savior's Lutheran Church, Moorhead. Visitation will be one hour prior to the funeral, at the church.

To order memorial trees or send flowers to the family in memory of Gene Halverson, please visit our flower store.