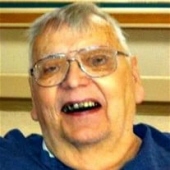 Fred Martin Valder was born in Ferndale, WA, on December 28, 1928, to Peter and Olga (Tungseth) Valder. He was the youngest of eight children. Fred graduated from Hillcrest Lutheran Academy in Fergus Falls, MN.

He served in the US Army from 1951 to 1953, at Fort Worden, WA, and Frankfurt, Germany. Following his military service, Fred began a life-long career in the grocery business. He developed a skill set for the food industry as a child (worked on a dairy farm), as a youth (food store clerk), and in the army (cook). Fred worked 22 years for Red Owl Foods in various locations in Minnesota, Wisconsin and North Dakota.

From 1975 to 1985, Fred oversaw three grocery stores and a bakery/café in the Dickinson, ND, area. Fred then worked in the commissary service of the US military. He served as a civilian officer at Fort Irwin, CA, Plattsburgh AFB, NY, Griffiss AFB, NY, San Vito Air Station, Italy, and Vogelweh Commissary, Kaiserslautern, Germany. He retired in December 1994 and resided in Fergus Falls, MN.

Fred married A. Mayling Aandahl on August 13, 1957, and were then married for fifty-one years. They had four children, Martin, Karen, John, and Ann. Fred lived, laughed and loved.

He was preceded in death by son, John, and wife, Mayling. Fred moved to his eternal residence Tuesday, October 6, 2015, passing at Bethany on University in Fargo, ND.

He is survived by Martin (Mim), Karen, Ann, and Char (Wayne), ten grandchildren and five great-grandchildren.

To order memorial trees or send flowers to the family in memory of Fred M. Valder, please visit our flower store.