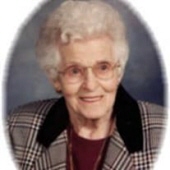 Florence Margaret Ferris, 100 years and 5 months, Moorhead, MN, died Wednesday, June 21, 2006, in Moorhead, at the home of her daughter, Kathleen.

Florence was born January 19, 1906, in Pana, IL, to John and Cecelia (Waterson) Singer. Florence moved, with her parents and nine brothers and sisters, to a farm south of Moorhead when she was six years old.


On April 21, 1926, Florence married William Ferris in Moorhead and they made their home in Sabin, MN, until 1965, when they moved to Moorhead. Her husband Bill died in June of 1974.

To order memorial trees or send flowers to the family in memory of Florence M. Ferris, please visit our flower store.