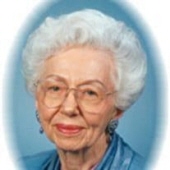 Evelyn D. Thomsen, 93, died Friday, March 30, 2012, in the Elim Rehab and Care Center, Fargo, ND.
Evelyn Delphine Rohde was born on January 6, 1919, the daughter of Fred and Annie (Tabbert) Rohde on the family farm NW of Valley City, ND. Evelyn's education included all the skills learned in a farm home and rural elementary school. She graduated from Valley City High School in 1936. Evelyn received her first certificate for teaching from Valley City Normal School and began teaching at age 19. After attending many sessions of summer school, she achieved her dream of graduating with her Bachelor of Arts degree in 1964, the same year that her oldest son, Norm, graduated from college, and her second son, Leon, graduated from High School.
Evelyn married the love of her life, Rudy Thomsen, on May 31, 1941, in Valley City. They started their home together on the farm that Evelyn knew so well while growing up and where they would spend the next 25 years raising their three sons. During those years, she was active in neighborhood and church service activities as well as teaching. She enjoyed most raising her family, being an excellent homemaker, and pursuing her hobbies of sewing, decorating and gardening.
When Rudy began a career in farm equipment sales, they moved to Valley City. Here Evelyn taught for 13 years at the Jefferson School in Valley City, completing a teaching career of 23 years. After retirement, they also enjoyed travel and living in Moorhead and Minneapolis, MN. Evelyn and Rudy's personal faith in Jesus Christ, as their Savior, sustained both of them through the many changes of their lives. God's promise of Eternal Life provided her comfort when Rudy passed away on March 18, 1990, after 49 years of marriage.
Evelyn is survived by her three sons, Norman (Lois) Thomsen, Moorhead, Leon (Marysia) Thomsen, Vienna, VA, and Neil (Irene) Thomsen, San Bernadino, CA; eight grandchildren; thirteen great-grandchildren; one great-great grandson; a sister-in-law, Meta Thomsen, Detroit Lakes, MN, and many nieces and nephews. She was preceded in death by her husband, Rudy; her parents; an infant brother; and two sisters, Alice and Marion.
Visitation: one hour prior to the funeral.
Funeral: Thursday, April 5, 2012, at 11 AM, in the Chapel of Elim Rehab and Care Center, 3534 S. University Dr. Fargo, ND.
Burial: Thursday, at 2:30 PM, in Memory Gardens, Valley City, ND.

To order memorial trees or send flowers to the family in memory of Evelyn Thomsen, please visit our flower store.