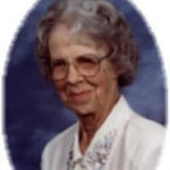 
Evelyn Olson, the daughter of Henry and Agnes (Kollin) Olson, was born July 17, 1913, in Buxton, ND. She grew up and received her education in Buxton and in Gardner, ND, where she graduated from high school. Evie attended Moorhead State Teachers College then taught for eight years in the Gardner area and for four years in Fargo, ND.


On October 12, 1947, Evie was united in marriage to James McCann in Moorhead. They made their home on the farm north of Moorhead, where they farmed for many years. After retirement, they continued to live on the farm.


Evie's husband, Jim, died on March 17, 1989. After his death, she continued to live on the farm. Recently, she became a resident of Eventide Lutheran Home in Moorhead.


Evie was active in Child Evangelism Fellowship and served on the board for KFNW radio. She was very active in many church ministries. She also ministered to many people in a number of ways, including baking and giving away her wonderful home-made cookies.


Evie is survived by two nieces, a nephew, several cousins, and a number of close friends, including JoAnn and Gary Wendt.


Visitation: One hour prior to the funeral.

To order memorial trees or send flowers to the family in memory of Evelyn McCann, please visit our flower store.