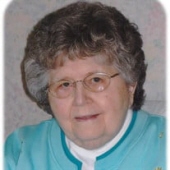 Evelyn Joyce Kunz, 83, passed away peacefully with family at her side, Tuesday, October 20, 2015, in Viking Manor Nursing Home, Ulen, MN, after a long battle with dementia.

She was born July 9, 1932, in Crary, ND, daughter of Leland and Eva (Parker) Johnson. She was the second of four children, along with two brothers and one sister. Her father was an elevator operator and her mother a homemaker. She attended schools in Sykeston, ND, and Starkweather, ND, where she graduated in May 1950. While living in Sykeston, she met her life-long sweetheart, Lawrence Kunz.

Evelyn and Lawrence were married May 20, 1951, in Starkweather. Lawrence was in the US Air Force, so after their marriage, they moved to Spokane, WA, where they made their first home. They had two children, Deborah and Lori. During his 27-year career, they lived in many locations across country including Washington, Canada, California, North Dakota, Alaska, Florida, and South Carolina, eventually retiring and moving to Hawley, MN, in 1974, where she helped build their dream home. In 1990, they moved to Moorhead, MN, where they lived until Lawrence's passing in 2009, after 58 years of marriage. In 2010, Evelyn moved to Viking Manor.

Evelyn was a wonderful wife, mother, grandmother, great-grandmother, friend and neighbor. She was a homemaker most of her life. Because of her love of children, she did in-home babysitting for many years. She enjoyed sewing, making clothing for herself and daughters and their dolls. She also enjoyed baking and cooking and was known for her Christmas goodies and decorating skills. After moving to Moorhead, she worked at the Moorhead Hardees for 8 years. She loved meeting and visiting with customers. She and Lawrence decorated the store for every season and holiday, which she thoroughly enjoyed. Evelyn was blessed with five grandchildren, who always loved staying at Grandma's house, and 6 great-grandchildren. Her smile and laugh will be deeply missed.

To order memorial trees or send flowers to the family in memory of Evelyn Kunz, please visit our flower store.