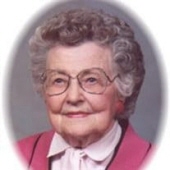 Evelyn Gertrude Thompson, the daughter of Alfred and Luella (Eide) Thompson, was born in the Hatton, ND, on November 27, 1913. She grew up and received her education in Hatton, where she graduated from high school in 1932.

On April 1, 1934, Evelyn was united in marriage to Elmer M. Bjerke at Goose River Lutheran Church, near Hatton. The family lived in Hatton until 1955, when they moved to Moorhead, MN.
Evelyn worked as a sales clerk at Martinson Jewelry in Moorhead, and at Royal Jewelers in Fargo, ND. She retired in the early 1980s.

In the late 1970's Evelyn and Elmer moved to Fargo. In November of 2002, they moved to Eventide Linden Tree Circle in Moorhead, and in June of 2003, Evelyn became a resident of Eventide Lutheran Home in Moorhead.

Evelyn was an active member of Lutheran Church of the Good Shepherd, where she was part of the quilter's group. She did extensive volunteer work at MeritCare Hospital and enjoyed crocheting caps for newborns. Evelyn was a skilled cook and baker. She loved to bake pies, cookies, and special cakes for her grandchildren and family. She was member of the Eastern Star for more than 50 years.

Evelyn G. Bjerke died on Sunday, June 13, 2004, at Eventide Lutheran Home, at the age of 90. She was preceded in death by her parents, three sisters, and three brothers.

Visitation: Wednesday, from 5:00 PM until 7:00 PM,
Korsmo Funeral Chapel, Moorhead, and
one hour before the funeral, at the church.

Burial: Thursday at 2:30 PM at St. John's Cemetery
in Hatton

To order memorial trees or send flowers to the family in memory of Evelyn Bjerke, please visit our flower store.