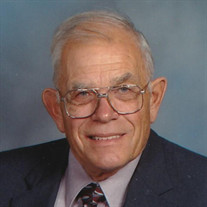 Born May 23, 1932, our beloved husband, father, grandpa, and great-grandpa, Eugene R. Radtke, 89, passed away at Eventide on Eighth in Moorhead, MN, on September 29, 2021. Eugene Russell Radtke was born in Fosston, MN, to Fred and Mabel (Houska) Radtke and was raised on the family farm east of Mahnomen, MN. He served his country in the Army from 1954 to 1956 mostly in France. He married Shirley Bentley in Twin Valley, MN on July 7, 1956. Eugene and Shirley took over the family farm and together they raised their two boys, Steven and Mark. Gene added a trucking business to his long list of duties and was also very involved with their church, Bethlehem Lutheran, in Mahnomen. They sold the farm and moved to Moorhead in 1979 and joined Our Redeemer Lutheran Church. Gene began working at the Union Stockyards in West Fargo, ND and was there until it closed. He then drove for Thompson Brothers Trucking until 2003 and kept busy in “retirement” by working for Goldmark Property Management. Eugene loved to work with his horses and mules at Mark’s farm and was always the happiest riding, driving the team or helping neighbors work their cows. He enjoyed many events with his friends in the Red River Harness and Saddle Club and was always up for a new adventure. He was quiet, hard-working, honest, loving, and loyal. Family meant everything to him and he and Shirley loved to travel and took many driving trips around the country over the years. Gene is survived by his wife of 65 years, Shirley, Moorhead; sons, Steven (Kari) Radtke, Fargo, ND, and Mark (Karen) Radtke, Glyndon, MN; grandchildren, Shannon and Amanda Radtke, Fargo, Tracy (Josh) Liesmaki, Plymouth, MN, Jennifer (Brandon Aabye) Seaburg, Dilworth, MN, and Teresa (Tyler) Ekren, West Fargo; seven great-grandchildren; numerous nieces and nephews. Preceding Eugene in death were his parents; a brother, Delbert; his mother and father-in-law; two sisters-in-law; and one brother-in-law. A Gathering of Family and Friends for Gene will be on Tuesday, October 5, 2021 at 5 pm with a memorial service at 6 pm in Korsmo Funeral Chapel, Moorhead, MN. Interment will be at the Riverside Memorial Cemetery in Mahnomen, MN. Blessed be the memory of Eugene Russell Radtke, he will be missed.

Born May 23, 1932, our beloved husband, father, grandpa, and great-grandpa, Eugene R. Radtke, 89, passed away at Eventide on Eighth in Moorhead, MN, on September 29, 2021. Eugene Russell Radtke was born in Fosston, MN, to Fred and Mabel (Houska)... View Obituary & Service Information

The family of Eugene R. Radtke created this Life Tributes page to make it easy to share your memories.

Send flowers to the Radtke family.