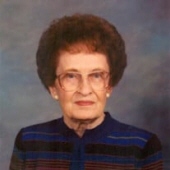 Esther Bertsch, the daughter of Carl and Emilia (Breitling) Bertsch, was born in Greenway, SD, on October 15, 1919. She grew up and received her education in Greenway and she was married there to Leon Haas on October 5, 1939.

The couple farmed in North Dakota until 1960, when they moved to West Fargo, ND. The family moved in 1963, to Moorhead, MN. Esther worked as a sales clerk at the JC Penney store in Fargo, ND, for 28 years, and retired in 1988.

Her husband, Leon, died on November 14, 2006. After his death, Esther moved to Fargo. In 2012, she moved to the Portland, OR, area, where she had lived since.
Esther died Wednesday, December 31, 2014, in Hearthstone at Murray Hill Assisted Living, Beaverton, OR, at the age of 95.

Visitation for Esther Haas will be Wednesday, Jan. 7, 2015, from 1 PM until 2 PM, followed by her funeral service at 2 PM, in Metropolitan Baptist Church, Fargo.

Burial will be in Sunset Memorial Gardens, Fargo.

To order memorial trees or send flowers to the family in memory of Esther Haas, please visit our flower store.