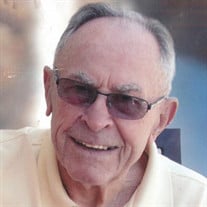 Elvin Roy Moran, 92, passed away Wednesday, May 20, 2020, with his daughter, Natalie, at his side. Elvin was born November 21, 1927, in Stephen, MN, to Patrick and Millie (Jasa) Moran. In 1939, his family moved to Crookston, MN, where he graduated from the Northwest School of Agriculture. In 1946, he was inducted into the Army and proudly served as a member of Occupation Troops in South Korea. On April 22, 1952, Elvin was united in marriage to Rose Fortier in Gentilly, MN. He was employed with Northwest Experiment Station in Crookston for 39 years, retiring as Farm Foreman in August of 1986. After retirement, he and Rose spent 21 winters in Weslaco, TX. They enjoyed travelling together and went on 13 cruises, one of which, they took all their children and grandchildren. They visited Ireland with their daughters, took several trips to Hawaii and for 16 years, rented cabins in lake country for the whole family to enjoy. When Rose got an idea to travel, Elvin was her “yes” man and granted all of her wishes. In 2003, they moved to Moorhead, MN, to be closer to Natalie, Dean, and their family. In 2009, they moved into independent living at Edgewood Vista in Fargo, ND. In February of this year, his dementia had progressed to where Rose could not care for him any longer, so he was moved into the memory care unit of Edgewood. The confusion of it all and the heartbreak of being away from his wife made the adjustment very hard for him. In early March, when the pandemic took over the world, he was no longer able to see his family and then shortly after that, he was tested positive with Covid-19, and no longer able to see his wife. Elvin taught his family so much, whether it was how to properly mow a lawn, plant a garden, sing a song in Bohemian, play a card game or backgammon, and to love unconditionally and have true faith in God. Elvin had many passions, which included, watching NASCAR, playing games, eating home cooked meals with his family and saying “pie please” at the end of every meal. He loved any time he could spend with his children and grandchildren. When he was able, he made his daily trip walking around Edgewood, teasing and joking with everyone who he met along the way. He brought so much joy to every person whom he met. Elvin is survived by his wife of 68 years, Rose, of Fargo,; children, Wayne (Kim) Moran of Lake Placid, NY, Ella Lystad of Lake City, MN, Natalie (Dean) McCleary of Moorhead and Kevin (Tamela) Moran of Marshall, MN; along with grandchildren and great-grandchildren, Nick Moran, Kyle Moran and Megan Levitt, Ryan (Kaitlin) Lystad, Fenix, Oxlyn and unborn child due in July, Brittney Lystad and fiancé, Paydon Huschka, Matthew McCleary, Alyse (Paul) Dalen and Graham, Ross (Ashley) McCleary, Blakely and Elliot, Katie (Chris) Steele, Karson and Kael, Allison (Aaron) Wiesen, and Connor, Erika (Jake) Muellner and Blaine Moran. He was preceded in death by his parents and by his sister, Gladys (Moran) Roybal and son-in-law Ray J. Lystad. Mass of Christian Burial will be held Saturday, July 25 in St. Joseph Catholic Church, Moorhead. A recording of Elvin's service will be available on Sunday, July 26 on our website. Elvin will be laid to rest in Calvary Cemetery in Crookston, MN.

The family of Elvin R. Moran created this Life Tributes page to make it easy to share your memories.

Send flowers to the Moran family.