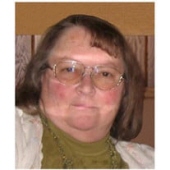 Tuesday evening, February 9, 2016, God called his daughter, Beth Agnew, to her eternal home with Him in Heaven.

Beth was born February 20, 1941, in Columbus, OH, to Salvation Army officer parents, Walter Sharp and Evangeline Ruth (Garland) Cruickshanks. Due to her parents' ministry, Beth spent her growing up years in many communities, including Worchester, MA, and various parts of the New York City, NY, area. As an adult she lived in Syracuse, NY, Philadelphia and Clifton Heights, PA, Dugway Proving Grounds, UT, and Fargo, ND.

Beth was script writer and assistant producer of the "It's Academic" television show in the Philadelphia area, the caseworker for The Salvation Army in Fargo for many years, served on the Youth for Christ Board, and was state representative for North Dakotans for a Drug Free Youth. She was named Fargo-Moorhead Woman of the Year in 1979, helped coordinate the early childhood pre-school vision and hearing program, and coordinated The Salvation Army's jail toy-lift ministry in Fargo for 28 years. Beth was an active member of the Edgewood United Methodist Church congregation for over twenty years, served as a lay speaker for Dakotas Conference of the UMC, was missions chair for the Dakotas Conference of the UMC, was human concerns chair for Edgewood United Methodist, led various youth programs and faithfully taught Sunday School.

For the past five years she has been a resident of Rosewood on Broadway Care Center. Her family would like to thank the staff of Rosewood for their loving care. Donations may be made in her memory to the United Methodist World Missions, The Salvation Army, or Gideons International.

To order memorial trees or send flowers to the family in memory of Elizabeth "Beth" Agnew, please visit our flower store.