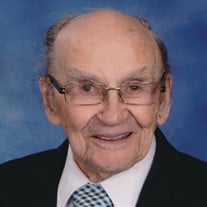 Elias Hoffart, age 93, of Moorhead, MN, died at home, surrounded by his loving family on Sunday, November 24, 2019. He was under the care of Hospice of the Red River Valley. Elias was born to Jacob and Margaret Hoffart on October 5, 1926, on the home farm north of Hazen, ND. He attended country schools. Elias worked for various farmers, Hazen Creamery, and as a bartender before enlisting in the army in 1946. He spent his tour of duty in Japan, during the “Occupation,” after WWII. Elias was very proud of his service. Elias moved to Fargo in 1952. He worked for Northern Transit Bus Company, where he drove city buses for 11 years. Elias met Marilyn Beckstrom in 1954 and they married in August 1960. They moved to his pride and joy, 5-acre hobby farm, five miles north of Moorhead. He began working for the City of Moorhead in 1963 and retired in 1991. In 1996, Elias and Marilyn moved into Moorhead after ill health forced Elias to sell the farmstead. Elias’ favorite pastime was his horses. He always wanted people to “come out” and ride horses. He would saddle up his horses anytime, with enthusiasm. Elias volunteered his time at St. Joseph’s School in the lunchroom and helped cook at Churches United for the Homeless. He loved going to auction sales, having rummage sales, playing Duroc (an old family favorite card game) and jigsaw puzzles. He loved visiting with his kids and friends and anyone who would speak German with him. His face lit up whenever he saw his grandchildren. Elias is survived by his wife, Marilyn; son, Paul (Janet), Caledonia, ND; daughters, Marla Coste, Fargo, ND, Tracy Hoffart-Clark, Paris, TX, and Heidi (David) Huus, Moorhead; 10 grandchildren; Leandra (Jeremy) Iverson, Allison (Miko) Elias, Danae, Dustin, Zachry Hoffart, Cory, Austin, Holly Coste, Callie, Jack Huus; and 8 great-grandchildren. He was preceded in death by his parents, three sisters and four brothers. Visitation will be held Thursday, November 28, 2019 from 5:00pm-7:00pm in St. Francis de Sales Church, Moorhead, with a prayer service at 7:00pm. Mass of Christian Burial will be held Friday, November 29, 2019, at 11:00 am in St. Francis de Sales Church.

Elias Hoffart, age 93, of Moorhead, MN, died at home, surrounded by his loving family on Sunday, November 24, 2019. He was under the care of Hospice of the Red River Valley. Elias was born to Jacob and Margaret Hoffart on October 5, 1926, on... View Obituary & Service Information

The family of Elias Hoffart created this Life Tributes page to make it easy to share your memories.

Send flowers to the Hoffart family.