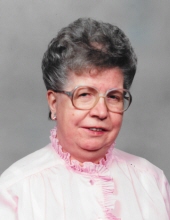 Since her father was a minister, they lived in several locations around Minnesota, including Duluth. They eventually settled in Fargo, ND, where Elaine worked as a switchboard operator for Bell Telephone.

Elaine was married to Arnold Gruenhagen, and they lived on the Iron Range of Minnesota. She lived in Robbinsdale, MN, for several years before settling in Detroit Lakes, MN.

She was preceded in death by her parents and a brother, Edgar Ferber.

Visitation will begin at 1 PM, followed by a funeral at 2 PM, Tuesday, April 19, 2022, in Korsmo Funeral Chapel, Moorhead.

To order memorial trees or send flowers to the family in memory of Elaine E. Gruenhagen, please visit our flower store.