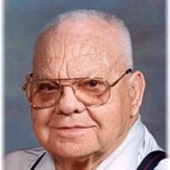 Edwin Alfred Schmidt, known to many as "Sonny", died Saturday, April 7, 2012, in Essentia Health in Fargo, ND, at the age of 81.
Edwin, son of Henry and Emma (Lammers) Schmidt, was born in Sabin, MN, on July 9, 1930. He grew up and received his education in Sabin. On May 16, 1950, he was married there to Maxine M. Motschenbacher. After their marriage, they lived in Sabin, and Edwin worked in the Gambles-Robinson warehouse in Fargo, ND.
In about 1967, the family moved to Auburn, Washington, where Ed worked in aircraft assembly for Boeing. He retired in 1992. In 1997, the couple moved to Moorhead, MN, where they had lived since. Ed and Maxine enjoyed their many trips to Branson, MO. Over the years, the family had many wonderful times going camping. In Washington, he was a member of the Eagles Club, and an active part of the "Rolling Eagles" camping group.
Edwin is survived by his wife, Maxine, Moorhead; a daughter, Shirley Steffen, Chehalis, WA; grandsons, Dan and Tony (Sonja) Steffen; and great-grandsons, Alex, Brian, and Josh Steffen; sister, Marian Steen, Moorhead; brothers-in-law, Duane (Vivian) and James Motschenbacher; and sisters-in-law, Margie Erickson and Harriet and Louise Schmidt. He was preceded in death by his parents; his son-in-law, Jim Steffen; brothers, Claus, Henry, John and Leonard Schmidt; and sisters, Louise Erickson, Minnie Ernst, Alyce Sauer, and Hulda Schmidt.
Visitation: Thursday, from 5 PM to 7 PM, with a prayer service at 7 PM, in Lutheran Church of the Good Shepherd, Moorhead. Funeral: Friday, April 13, 2012, at 3 PM, in Lutheran Church of the Good Shepherd, Moorhead.

To order memorial trees or send flowers to the family in memory of Edwin Schmidt, please visit our flower store.