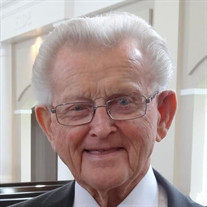 Edwin Reinhold Hausauer was born October 1, 1923, in Kief, ND, to Edward and Lena (Rosenau) Hausauer. He graduated from Goodrich (ND) High School in 1942. From 1943-46, Edwin served his country as an attachment to General Patton’s army during World War II. Upon his return, he married Lillian Berg on June 7, 1947, in McClusky, ND. Ed and Lillian moved to the Fargo-Moorhead area where he worked at the Grand Barber Shop. In 1961, he opened his own shop, “Esquire Barbers,” on N.P. Ave. and Broadway in Fargo. After retirement, Ed continued to barber in Fargo-Moorhead and Mesa, AZ, for the next 25 years. Edwin was a founding member and elder of Community Baptist Church, Fargo, ND. Most recently, he was a resident of Rosewood on Broadway in Fargo. Edwin went to heaven at 96 years of age on Tuesday, February 25, 2020, in the presence of his loving family. Edwin was preceded in death by Lillian, his wife of 71 years. He is survived by his daughter, Michele (Michael) Connor of Fairfax, VA; son, Tim of Fargo; six grandchildren; six great-grandchildren; and a brother-in-law, Paul Berg, of Atlanta, GA. Visitation for Edwin will be Friday, February 28, 2020, 6 PM to 8 PM in Korsmo Funeral Chapel, Moorhead, MN. His funeral will be Saturday, February 29, 2020, at 11 AM at Community Baptist Church, Fargo. Burial will follow in Moorhead Memorial Gardens. (Korsmo Funeral Service, Moorhead, MN)

Edwin Reinhold Hausauer was born October 1, 1923, in Kief, ND, to Edward and Lena (Rosenau) Hausauer. He graduated from Goodrich (ND) High School in 1942. From 1943-46, Edwin served his country as an attachment to General Patton&#8217;s army... View Obituary & Service Information

The family of Edwin Hausauer created this Life Tributes page to make it easy to share your memories.

Send flowers to the Hausauer family.