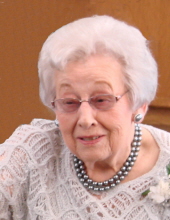 Edna, the daughter of Jacob and Ernestina Guenther, was born in Leola, SD, on August 1, 1925. She grew up in Frederick, SD, and received her education in Ellendale, ND, where she graduated from high school in 1942. She attended Ellendale (ND) Normal School where she met her husband, Melvin Buck. They were married on March 28, 1943. After Mel’s graduation they moved to Redfield, SD, where he taught school. They moved to Huron, SD, and later to Aberdeen, SD, where they lived for nearly 40 years. Edna was a mother and homemaker until their children were in school and then Edna worked as a school secretary and enjoyed working with the elementary children. She was active in church and school functions.

After Mel retired in 1981, the couple moved to Bloomington, MN, and worked as resident managers at condominiums. They moved to Fargo, ND, in 1989, and were active in Bethel Evangelical Free Church. Melvin died on November 7, 2018. They were married for 75 years. After Mel’s passing, Edna moved to Raleigh, NC, where her daughter lives and later to Sheridan, where her son lives.

Edna’s funeral service will be on Tuesday, May 10, 2022, at 11 AM, in Bethel Church, Fargo. Visitation will be one hour prior to the funeral. Edna will be buried on Wednesday, May 11, 2022, at 2:30 PM in Dawn Valley Memorial Park, Bloomington. To view the live stream of Edna’s service you can find a link in her obituary page at www.korsmofuneralservice.com on the day of the service.

To order memorial trees or send flowers to the family in memory of Edna R. Buck, please visit our flower store.