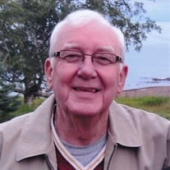 Dwight was raised in Moorhead, MN, and graduated with the class of 1963 from Moorhead High School. Dwight was formerly married to Karen Frederickson of Glyndon, MN. Dwight enlisted in the US Air Force and received a Certificate of Training for a Voice Intercept Processing Specialist and also graduated from San Jose (CA )State University with a BA degree in Russian Language. He was stationed with a Security Squadron at Berlin, Germany. Dwight was honorably discharged after his tour of duty in 1968.

Dwight spent thirteen years with the Minnesota National Guard as a Military Technician and retired in 2004. While in the Army National Guard he received the Meritorious Service Medal and other medals and awards for professionalism to duty. One of the service reviews noted his outstanding duty performance and was truly one of the soldiers they could count on to get the job done right the first time and required no supervision on assigned tasks. Dwight was honorably discharged August 20, 2005, with the rank of Sergeant 1st. Class.

Dwight then became the NAPA parts guy in Fargo and met Beverly Kubela and moved to Wahpeton, ND. Dwight was a good visitor to everyone and delivering parts for NAPA was a job he enjoyed in retirement. Dwight was a real sports fan. He attended many sporting and school events for his grandkids, fishing and pontoon rides around the lake, auctions, benefits, camping and Snickers Blizzards. Dwight attended many country music concerts (WeFest ), met friends at the Casino, bingo and fish fry's.

Dwight was preceded in death by his parents; brother, Howard; niece, Orliss Kringler; and a sister-in-law, Yvonne Kringler.

Visitation for Dwight will begin at 5 PM, followed by a memorial service at 7 PM, Thursday, June 4, 2015, at Our Savior's Lutheran Church, Moorhead.

To order memorial trees or send flowers to the family in memory of Dwight Kringler, please visit our flower store.