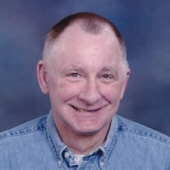 Douglas John Wittmer was born November 19, 1952, in Grand Forks, ND, to Herbert and RoseMarie (Hemmelgarn) Wittmer. Doug was raised in Moorhead, MN, where he graduated from high school in 1970 and attended Moorhead State College.

Doug worked for Ed Welle Construction, Moorhead, until August of 1973, when he suffered a traumatic brain injury as a result of a car accident. He lived with his parents in Moorhead following the accident. He volunteered for the Fargo (ND) Parks and Recreation Department assisting people with disabilities, where he was known for his compassion and friendliness.

In August of 2008, Doug suffered additional brain trauma as a result of an accident in their home. Doug lived in Elim Home, Fargo, for three years until he moved in with his sisters and their families.

In October of 2013, Doug and his mother made their home in RiverPointe, Moorhead. In June of 2015, Doug moved to Perham (MN) Living Center, where he died Monday, August 3, 2015, at sixty-two years of age.

Doug was preceded in death by his parents.

Burial will be at 3 PM, Saturday, in St. Henry's Catholic Cemetery, Perham.

To order memorial trees or send flowers to the family in memory of Douglas J. Wittmer, please visit our flower store.