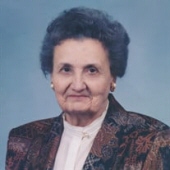 Dorothy Elizabeth Green was born November 17, 1920, one of five children of Alfred and Louetta (Bauscher) Green, in Sabin, MN. She was raised there attending elementary school in Sabin and graduating from Moorhead State College Campus High School. She met and married Phil Myhra from Fargo, ND, on an air base during World War II. They made their home in Sabin where Dorothy was a homemaker and wonderful gardener. Phil died in 1978 and Dorothy continued to make her home in Sabin until moving to Moorhead in 1994.

She was very active for many years in Bible study and the choir at her church..

Dorothy was an extremely talented pianist and singer. With her sister, she used to sing and play piano throughout the community. She also enjoyed playing bingo and going out with her friends at Eventide and enjoying coffee.

She is survived by her children, Dana, Donna, and Phil, seven grandchildren and three great- grandchildren; brother, George; and sisters, Mary and Ruth.

Dorothy was preceded in death by her parents; husband, Phil; daughter, Doreen; and sister, Jeanette

A Lunch and Visitation for Dorothy will be Friday, November 11, 2016, beginning at 1:00 PM with her Funeral Service following at 2:00 PM, in Korsmo Funeral Chapel, Moorhead. Burial will follow in Trinity Lutheran Cemetery, Sabin, MN.

To order memorial trees or send flowers to the family in memory of Dorothy Myhra, please visit our flower store.