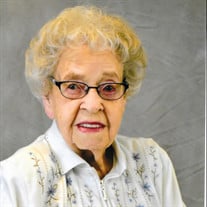 Doris Viola Renfrew was born October 30, 1919, in Hendrum Township, MN, to John & Clara (Norby) Renfrew. She married Jennings Kuvaas on December 12, 1943, at Halstad, MN, and they lived and farmed east of Perley, MN. Jennings retired from farming in 1982. Doris grew up in a musical family playing the piano and guitar. She and her sister sang at many church events around the Halstad area. After she was married she became a homemaker and enjoyed baking, sewing and canning. There were always baked goods in the house just in case company dropped in and the coffee pot was always on. Doris always enjoyed her strong, black coffee, still requesting it two days before her passing. She also helped with the farming by driving truck during harvest. Following Jennings’ death in 1986, Doris remained on the farm until 1990 when she purchased a home in Moorhead, MN. She had second thoughts about buying a house at her age, but as it turns out she enjoyed living in her Moorhead house for 26 years and at the age of 97 decided to move to River Pointe Living Center in Moorhead. She spent her summers tending to her many flower gardens and chasing the rabbits out of them. In addition to being a dedicated and loving wife and mother, Doris held an unwavering faith in God, which she shared with those around her. She was active at Bethania Lutheran Church and later at the Bridgepointe Community Church of the Nazarene in Moorhead. Doris died Friday, June 5, 2020, under hospice care, at River Pointe at the age of 100. Survivors are her daughter Lana (Russell) Rensvold and many nieces and nephews. Visitation for Doris will be Thursday, June 11, 2020, from 5 – 7 PM, in Korsmo Funeral Chapel, Moorhead. A graveside service will be Friday, June 12, 2020, at 11 AM, in Bethania Lutheran Cemetery, Perley. If attending either service, please be aware of current CDC guidelines regarding gatherings of this nature. Memorials may be made to Bethania Cemetery fund or a charity of your choice.

The family of Doris Kuvaas created this Life Tributes page to make it easy to share your memories.

Send flowers to the Kuvaas family.