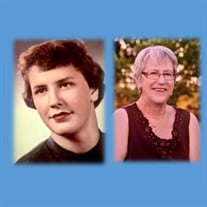 Donna McDaniels 82, formerly of Wolverton, Minn. passed away peacefully on May 11, 2021. She was a mother, grandmother, great-grandmother, sister and friend to many, and will be dearly missed. Her devotion to her family, love of the Minnesota Twins and a good cup of coffee will never be matched. Donna began her life at St. Ansgar’s Hospital in Moorhead, Minn. She attended elementary and high school in Wolverton. After graduating she moved to Minneapolis to pursue additional education at Minneapolis Business College and earned her certificate in secretarial administration. It was there she met a handsome gentleman named Jerry who would become her husband in August of 1958. Donna worked primarily as a homemaker and mother, and in the mid 60’s moved the family back to Wolverton to be closer to her parents. Donna’s greatest gift was that of her time. She left her position at 3M to care for her mother and father in their golden years and then to care for Jerry, her husband, as he battled heart issues and eventually cancer. During this time, she again gave to others, taking a position at Riverview health center as an aide. For 15 years Donna worked with the residents of Riverview and received recognition for her dedication to serving them. After Jerry’s passing in 1999, her intimacy with her family grew ten-fold as many great-grandchildren entered her sphere. She was able to travel with her sister to Hawaii and with her daughters and granddaughter Jamie to New England where she went whale watching, visited Fenway Park and saw the vibrant colors of autumn in the Northeast. She also spent countless weekends with her sons attending church and family gatherings. While her body began to fade, her mind remained sharp as a tack as did her wit and sense of humor. She delighted in the Lord and his promises and is now rejoicing with those who have gone before her. She is survived by her children: Jeff (Sharon) McDaniels, Fargo; Chris (Elaine) McDaniels, Wolverton; Lori (Carl) Nord, Wolverton; Kerry Conlin, Fargo; Melanie McDaniels, Salt Lake City. Grandchildren: Tim (Brenda) McDaniels, Fargo; Jamie (Garrett) Teahan, Redondo Beach; Lauren (Jim) Frey, Carver; Harlie Nord, Wolverton; Dexter, Mackenzie, and Kallee Conlin, Fargo. Great grandchildren: Caitlin McDaniels, Fargo; Fiona and Fitzgerald Teahan, Redondo Beach; Brielle Frey, Carver. Siblings: Margaret Burrer, Wahpeton and Paul Johnson, Williston. She was preceded in death by her parents, Harry and Marion Johnson. Her husband, Donald “Jerry” McDaniels. Her sisters, Carol Jones and Shirley Ernst and her grandchild, Raven Nord. The family would like to invite all who experienced her generosity and kindness to a celebration of her life on July 31, 2021 at the Eagle Valley Evangelical Free Church in Christine, N.Dak. at 11 A.M. In Lieu of flowers and gifts, we ask that you donate to one of the following: Hospice of the Red River Valley, The Valley Senior Services Fund or the Sanford Health Foundation-Behavioral Health Services Adolescent PHP program. Each of these local non-profits provide critical services directly to the Fargo-Moorhead community.

Donna McDaniels 82, formerly of Wolverton, Minn. passed away peacefully on May 11, 2021. She was a mother, grandmother, great-grandmother, sister and friend to many, and will be dearly missed. Her devotion to her family, love of the Minnesota... View Obituary & Service Information

The family of Donna McDaniels created this Life Tributes page to make it easy to share your memories.

Send flowers to the McDaniels family.