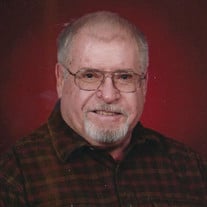 To view Don's Celebration of Life, please click on the link below: https://portal.midweststreams.com/services/watch/aA4Cp28JN5 Donald E. Strom, 85, of Moorhead, MN, died Thursday, November 19, 2020, in Eventide on Eighth, Moorhead. Donald Eugene Strom was born July 1, 1935, the son of Gordon and Margaret (Fjug) Strom, in Frazee, MN. He lived in Detroit Lakes, MN, and moved with his family to Moorhead where he graduated from Moorhead High School. Donald then attended Concordia College in Moorhead graduating in 1957. He would later attend North Dakota State University where he would receive his Master’s in Education. After graduating from Concordia, Donald began working for the North Dakota Employment Office in Fargo. On December 27, 1959, Donald was united in marriage to Rose-Mary Green in Enderlin, ND. They made their home in Moorhead where he continued to work for the employment office before working for Kindred High School as a guidance counselor. Donald then went to work for Southeast Human Services in Fargo before serving as a counselor and teacher for Moorhead Area Schools for many years until his retirement. He had been a resident of Eventide on Eighth since 2012. He was a member of Our Savior’s Lutheran Church, enjoyed staying active and going to the Y, and volunteered at the MSUM Science Center. He also coached youth soccer when it was first introduced in Moorhead. Donald and Rose-Mary enjoyed traveling and made many trips exploring the provinces of Canada. He was also a lover of the outdoors and nature. He is survived by his wife, Rose-Mary; daughter, Terri (Daniel) Busby, Felton, MN; son, Matthew (Jessica) Strom, Estherville, IA; and grandchildren, Sara Busby, Lily, Madalen, and Nora Strom. He was preceded in death by his parents; and daughters, Karen and Sharon. The family would like to give a special thank you to the staff at Eventide on Eighth for their years of care. A Private Family Service will be held and burial will be in Riverside Cemetery, Moorhead, MN. (Korsmo Funeral Service, Moorhead, MN)

The family of Donald E. Strom created this Life Tributes page to make it easy to share your memories.

To view Don&#39;s Celebration of Life, please click on the link below:...

Send flowers to the Strom family.