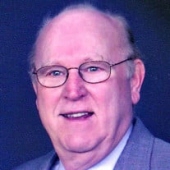 Don was born in Moorhead on June 19, 1931, to Elvin and Armella (Rutten) Setter. Don lived his entire life in Moorhead where he attended St Joseph's Grade School, Moorhead High School, and Moorhead State College. In 1955, he married his lifelong partner, Patricia Rush, from Fargo. They were blessed with five wonderful children.

While attending Moorhead State, Don began honing his selling skills by going door to door selling cookware. Upon graduation from college, he began selling insurance for Western States Life while also selling some real estate. In 1954, Don took an additional job with Anheuser-Busch, selling yeast. He loved traveling to all the small town bakeries scattered throughout Minnesota and North Dakota, making friends with all the local bakers - and he was a salesman through and through. He was hard working and persevered through many difficult times in his career.

In 1968, Don was able to buy the local Anheuser-Busch beer distributorship and established D-S Beverages. Don simply loved being the "Bud Man" and was loyal to the "King of Beers" his entire life. He drank nothing but Budweiser and always credited Anheuser-Busch with giving him the life he attained.

Don had many passions in his lifetime including Notre Dame football and playing cards (whist.) He also enjoyed the simple things in life like his apple trees in the backyard, his tomato plants, and his modest home (affectionately referred to as "Club 1117"). He was an Eagle Scout who took the oath of Eagle seriously his entire life. He served in the Army as a supply Sergeant during the Korean War, from 1950-1952, and was a long time member of the Elks and American Legion Clubs. He was a loyal man - sometimes larger than life - with a tough exterior, but with a soft, giant heart inside. He grew up in the recession and knew what it meant to be poor. He never forgot this and was always the first one to help someone who was having a hard time in life. He was the guy that left the giant tip, put a big bill in every Salvation Army kettle, and passed out potato chips, barbeque sauce or licorice just because he wanted to help a small business succeed.

Don was very vocal about his views and opinions and was never afraid to share these beliefs. He was a staunch Republican and Catholic who showed unwavering loyalty to America and St. Joseph's Catholic Church. Through his words and actions, Don held tight to his beliefs and would share his "Donsense" cards with anyone who would listen.

Above all else, Don's family was his life. He loved his wife, his nine brothers and sisters, his five children, all his grand and great-grandchildren, and all his nieces and nephews. As he grew old, nothing made him happier than to spend time with all of them. He was the first one to call on your birthday and first one to say thank you after spending time together.

To order memorial trees or send flowers to the family in memory of Donald Setter, please visit our flower store.