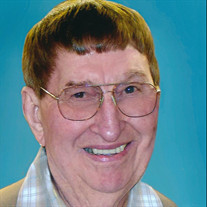 Donald M. Barth, 93, of Moorhead, MN, formerly of Sabin, MN, passed away on Sunday, November 17, 2019, under the care of Hospice in Eventide on Eighth, Moorhead. Donald Marlowe Barth was born June 20, 1926, the son of Henry and Elva (Burfiend) Barth, in Wilkin County, MN. He grew up in the Sabin area on the family farm raising pigs, milking cows and farming. Donald attended rural Sabin grade school, graduated from Comstock High School in 1944, and was confirmed at Trinity Lutheran Church, Sabin. In 1947, he was united in marriage to DeLoris Anderson of Kragnes, MN, and had his first son Thomas “Tommy” in 1949. Their marriage ended in divorce. In 1955, Donald obtained his commercial pilot license and began his crop spraying career which he retired from in 1973, but continued farming. Donald was united in marriage to Ann Marie Peterson of Warroad, MN, in 1966 and they moved to a farm near Campbell, MN. He then adopted his second son, Bradford, in 1966, and Brian was born in 1967. Their marriage ended in divorce. Donald moved to the Thief River Falls, MN, area in 1972, where he spent many years following his passion of buying, selling and farming land. In 1984, he was united in marriage to JoAnn White of Thief River Falls. They spent many winters in Laughlin, NV, where he dealt in land development and house building. Their marriage ended in divorce. Don always had a passion for hunting and flying. He hunted fox from the airplane for many years and took several trips to Canada hunting timber wolves from the plane. One of his greatest joys in life was the hunting trips he would take with his sons and grandsons. He is survived by his sons, Tom, Bradford (Joyce) and Brian (Crystal) Barth; seven grandchildren and fifteen great-grandchildren. He was preceded in death by his parents; daughter-in-law, Linda; and two brothers. A Funeral Service for Donald will take place on Thursday, November 21, 2019 at 11 AM, with a visitation one hour prior, in Trinity Lutheran Church, Sabin. Burial will be at Trinity Lutheran Cemetery, Sabin. (Korsmo Funeral Service, Moorhead, MN)

Donald M. Barth, 93, of Moorhead, MN, formerly of Sabin, MN, passed away on Sunday, November 17, 2019, under the care of Hospice in Eventide on Eighth, Moorhead. Donald Marlowe Barth was born June 20, 1926, the son of Henry and Elva (Burfiend)... View Obituary & Service Information

The family of Donald Barth created this Life Tributes page to make it easy to share your memories.

Send flowers to the Barth family.