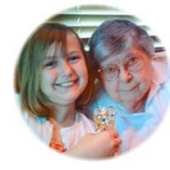 Dolores Henrietta Mohr, daughter of Henry and Regina Mohr was born in Perham, MN, on July 15, 1927. She grew up and received her education in Perham. She was married there to Herbert G. Olson on May 4, 1957.

Following their marriage, Dolores and Herbert lived in Libby, MT, Perham, Detroit Lakes, MN, and Hillsboro, ND. In 1967, they moved to Fargo, and in 1968, they moved to Moorhead, where they had lived since. Dolores worked as a nurse's aide in St. Ansgar Hospital, Moorhead, at the Elim Rehab and Care Center, Fargo, and as a hostess in the Fargo Burger King.

Dolores's husband, Herbert, died September 16, 2001. After his death, Dolores continued to live in Moorhead. She enjoyed playing cards. She crocheted potholders and did other handwork. Dolores was famous for her wonderful baked goods, including her donuts and her Christmas goodies. She enjoyed her family and informally adopted many of her children's friends as her very own.

To order memorial trees or send flowers to the family in memory of Dolores Olson, please visit our flower store.