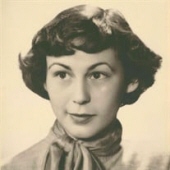 Dolores "Dee" Sundet, 85, Moorhead, MN, died Tuesday evening, November 15, 2016, in a Fargo hospital with family members beside her.
Dee was born April 1, 1931, at St. Ansgar Hospital in Moorhead, the first daughter of Henry and Viola (Smith) Strock. She grew up on a farm near Ada, MN., with three sisters and a brother. The family was a lively, busy one. As a girl and young woman, Dee preferred working outside with her father in the fields, to working in the house. Sitting in a truck, waiting for grain to load, provided Dee the opportunity to read. She graduated as valedictorian from Felton (MN) High School in 1949, and attended Moorhead State Teachers College (now Minnesota State University Moorhead). After taking a semester off to live in Hawaii, she graduated with a degree in English. During her senior year, she was president of the Gamma Nu Sorority.
Dee married Jerry Sundet on August 16, 1953, on the family farm, making sure Jerry knew the partnership would be 50-50 from day one. Jerry never doubted that, and happily agreed. They both taught in area schools for a couple years, then moved to Coral Gables, FL., where Dee taught English at Coral Gables High School.
The couple returned to Minnesota when Jerry accepted a music teaching position at the Campus School at Moorhead State. Dee began collecting antiques and loved fixing up their two Moorhead homes. Daughter Becky and son Mitch filled out the family. Country picnics, family gatherings at Detroit Lakes, MN, camping, cross-country road trips, parties for friends and family, books and Fargo-Moorhead Symphony concerts filled the family's lives.
They moved to Minot, ND, in 1968, when Jerry took a position at Minot State College. Dee taught English at Minot State part-time. She was also active in the Women's Symphony League and the League of Women Voters. She continued to entertain and cook with joy and creativity, collect antiques, garden and sew.
She got her master's degree in English literature following two intense summer sessions of study at North Dakota State University. The family moved to England when Jerry was granted a sabbatical leave to study music for a year. They lived in a small English village while Dee studied Shakespeare, visited art galleries in London, and planned adventures for the family. After returning to Minot, she left teaching to open a small business featuring antiques, local art and Native American baskets. As the business grew, she renamed it 'd's of Minot'. She added an interior design service, contemporary household items, fine china, furniture, original art, Native American handwork and gourmet cooking items. She was the first retailer in Minot to sell high-end whole bean coffee.
Dee and Jerry began a great adventure when they dismantled an old log home that came from an ancestor's farmstead, and reassembled it on 22 acres of Mouse River land near Velva, ND. There, many family members and friends enjoyed parties, family gatherings and watching wildlife.
When Jerry and Dee retired, they returned to Minnesota. They built their dream home on Bad Medicine Lake, near Park Rapids, MN. Around that time, grandchildren began arriving, and they were a source of great joy to Dee. At Bad Medicine, she cooked enormous gourmet meals, held art and antique sales, attended free-thinkers meetings in Fargo, hosted two weddings and became foster grandparents to a young boy. The couple also traveled to Portugal, Mexico, Spain, France and Norway. Jerry died in 2005.
Dee was an elegant, intellectual, strong woman who never let her physical challenges (rheumatoid arthritis and Alzheimer's) destroy her spirit of independence. She is survived by a daughter, Rebecca Sundet-Schoenwald (Bruce Schoenwald), Fargo; a son, Mitchell Sundet (Pam Friedman), Austin, TX.; a brother, William Strock, Bellingham, WA; and three grandchildren, Samuel Schoenwald, Isolde Sundet and Harry Sundet; and several beloved nieces and nephews.

A celebration of Dee's life is planned for this coming summer.

To order memorial trees or send flowers to the family in memory of Dolores "Dee" Sundet, please visit our flower store.