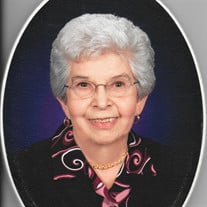 Delores Ann Wood was born July 23, 1929, in rural Breckenridge, MN, to Oscar and Ann (Max) Wood. She was baptized and confirmed in the Methodist church in Breckenridge. Delores attended country school until the eighth grade, and then Breckenridge High School, where she graduated in 1947. Delores worked as a waitress in Uncle Jim’s Restaurant in Breckenridge. While attending a dance at the Breckenridge American Legion Pavilion, she met Duane Enkers. They were married June 17, 1949, in Breckenridge, where they made their home. Delores took a secretarial course at State School of Science, and then worked at Spies Super Valu for twenty years. She worked as both a checker as well as a bookkeeper. Delores and Duane moved to Moorhead, MN, in 1987, and they both retired in 1989. The move to Moorhead allowed them to be closer to family, especially the grandchildren. They bought a motorhome and made a dream vacation to Alaska. They also enjoyed wintering in Mesa, AZ, for eleven years. Duane preceded her in death June 28, 2014. Delores enjoyed numerous activities over the years. She loved to dance, play cards, read, and fish. Delores always did a lot of canning since they raised a large vegetable garden every year. She was active in 4-H, was an assistant cub scout leader, bowled in a league in Breckenridge, and was involved with Railroad Auxiliary: Lodge. She was a member of Wilkin County Homemakers and had been a member of The Daughters of the American Revolution. Delores was called home to the Lord on Friday, February 21, 2020, at Sanford Health, Fargo, at ninety years of age. She is survived by her children, Colleen (Rick) Abel, James “Jim” (Kathy) Enkers, Gail Enkers, and Jeffrey Enkers, all Moorhead; grandchildren, Bridget (Tracy) Egerdahl, Robert (Kelly Kemmer) Abel, Ryan (Jessie) Abel, Cheri (Neil) Wohl, Amy (Mark) Gumto, Greg (Nicole) Enkers, Kyle (Caitryn) Enkers, and Tessa Enkers; great-grandchildren, Jordie and Joel Egerdahl, Kinsley Abel, Anna and Brady Wohl, Matthew and Aubrey Gumto, Allie and Joselynn Enkers, Madelyn Abel, and Baby Girl Abel, due in March; siblings, Darrel Wood, Breckenridge, Dorothy (Mike) Krause, Raleigh, NC, Della (Arne) Peterson, Wolverton, MN, David (Carol) Wood, Breckenridge, and Doris Bezenek, Foley, MN. In addition to her husband and parents, Delores was preceded in death by a daughter-in-law, Tami Enkers; sister, Donna Matteson; brothers, Dale, Dennis and Duane; brother-in-law, Jim Bezenek; and sister-in-law, Judy Wood. Visitation for Delores will begin at 12 noon, with a funeral at 2 PM, Tuesday, February 25, 2020, in Grace United Methodist Church, Moorhead. Burial will take place at a later date in Riverside Cemetery, Breckenridge.

Delores Ann Wood was born July 23, 1929, in rural Breckenridge, MN, to Oscar and Ann (Max) Wood. She was baptized and confirmed in the Methodist church in Breckenridge. Delores attended country school until the eighth grade, and then Breckenridge... View Obituary & Service Information

The family of Delores Enkers created this Life Tributes page to make it easy to share your memories.

Send flowers to the Enkers family.