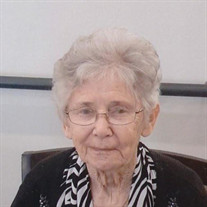 Delores Bekkerus, age 91, of rural Glyndon, Minnesota, died on Sunday, June 20, 2021 in Lilac Homes Memory Care, Dilworth, MN. Delores Maline Gilge, the daughter of William and Garnet (Bowersfield) Gilge, was born in Ada, MN, on April 29, 1930. She grew up and received her education in Moorhead, MN. On August 27, 1949, she was united in marriage to Donald E. Bekkerus, in Fargo, ND. They lived in Moorhead, rural Glyndon, and on the family farm north of Glyndon, where they farmed. Delores worked as a bookkeeper for the City of Fargo. Donald died on December 24, 2000. Delores continued to make her home on the farmstead, where she was an avid gardener, and spent winters in Naples, Florida. She was an active member of Community Baptist Church, Fargo. Her faith in Jesus was important to her. In July of 2020, Delores became a resident of Lilac Homes Memory Care, Dilworth. Delores was preceded in death by her husband, Donald; her parents; and a brother, William Gilge Jr. She is survived by her daughter, Diane (Jeffrey) Ulschmid, Glyndon; a grandson, Ryan, of Fargo; sisters, Margaret (Dennis) Matson, Hilton Head Island, SC, and Gail (Gordon) Ericksen, Crystal Lake, IL; and a sister-in-law, Jeanne Gilge, West Fargo, ND. Visitation for Delores will be Thursday, June 24, 2021, from 5 PM until 7 PM, in Korsmo Funeral and Cremation Chapel, Moorhead. Her funeral will be Friday, June 25, 2021, at 11 AM, in Community Baptist Church, Fargo. Burial will be at Concordia Lutheran Cemetery, rural Glyndon. Arrangements by Korsmo Funeral & Cremation Service, Moorhead, MN.

The family of Delores Bekkerus created this Life Tributes page to make it easy to share your memories.

Send flowers to the Bekkerus family.