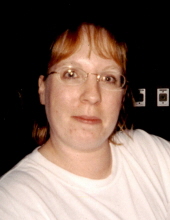 Deborah Kay Wanner was born March 27, 1967, in Fargo, ND. She was raised in Moorhead and attended Moorhead High School. After high school, Debbie made her home in Fargo and work at the Moorhead Golden Living Center, Smuckers, and Interstate Assembly Systems. She then moved to Grandin, ND, where she work for the packing plant in Hillsboro, ND. Debbie later returned to Moorhead and was currently working at the Holiday Station in south Moorhead.

Debbie enjoyed making memories out of the little things in life, such as reading, crafts, home decorating, watching movies (horror), and listening to rock and country music. She was truly a creative and free spirit. ♡

To order memorial trees or send flowers to the family in memory of Deborah "Debbie" Kay Johnson, please visit our flower store.