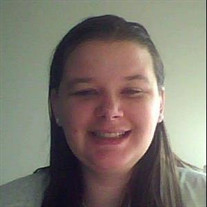 Debora “Debbie” Ann Anderson was born on August 30, 1980, in Fargo, ND, to Judith “Judy” Ann (Dehn) and Marvin William Anderson. She grew up in the small Minnesota town of Sabin, with her two siblings, Jon and Lisa, and was the youngest of the three. She attended all her elementary and secondary years of school in the neighboring city of Moorhead, MN. Debbie was a successful graduate of Moorhead Senior High School, class of 1999, and then went on to study finance at Minnesota State Community and Technical College. Debbie had a very determined and brave spirit about her. She battled her childhood onset disorder of epilepsy all her life. Although this made no difference to her because when she decided on a goal, she went for it no matter how long or how difficult it was for her. She bravely moved to Duluth, MN, and lived there for some time and then moved once more to the Twin Cities area where she stayed for a few years. Although she had this brave and independent spirit, she missed her family and friends, so she finally settled in the Fargo-Moorhead area. Debbie moved into an apartment in Dilworth, MN, where she lived with her roommate, Lari, and their caregiver. She often talked about all the outings and games she played with her roommate and loved and enjoyed their friendship very much. Debbie had many passions, one of which was singing and was a member of her school choir and loved it. She also enjoyed socializing with people of all ages and cultures. Her smile and laugh were contagious. Despite the unfair hand Debbie was dealt in life from her struggles with epilepsy and mental health issues, she persevered and lived a full life. She loved attending Prairie Heights Church with her dad every week. It was always something she looked forward to. Debora Ann Anderson passed away on Sunday, December 15, 2019, in Sanford Hospital in Fargo. She suffered from what was later discovered as a lethal pulmonary embolism. She will be missed by so many for her loving and caring nature and her strong-willed spirit. Debbie is survived by her niece, Shelby Anderson; nephews, Cody Anderson, Hunter Anderson, Caleb Motl and Tucker Motl; father, Marvin; brother, Jon Anderson (Cheryl); sister, Lisa (Keith L.) Motl; uncle, Lester Anderson; aunts, Carol (Dennis) Torno, Linda Rice, Kathy (Mark) Lande and Renee Mead; as well as cousins, Jules Dolphin Grey, LaDonna (Joe) Canino, Robin (Matt) Sheppard, Tim (Shereen) Stark, Amy (David) Kain, Ann (Nate) Booth, Michelle (Michael) Mastrantonio, Jason (Ann) Mead, Jennifer (Eric) O’Link, Susie (Mike) Hamilton, Brian (Brenda) Torno, Mark (Tressa) Torno; and many second cousins. Debbie was preceded in death by her mother, Judy Anderson; her grandparents, Elsie and Harvey Dehn and Lillian and Harold Anderson; aunt Arlyss Anderson; and uncles, Lynn Rice and Dan Mead. A sincere thank you to all the caregivers Debbie has had throughout her life. Our family would also like to thank all those who were Debbie’s friends, especially Ann-Mari. Your friendship with Debbie meant a lot and she loved you and all those that she called friends. A Visitation for Debora will be Saturday from 12:00 PM until 2:00 PM, in Korsmo Funeral Chapel, Moorhead Her Funeral Service will be Saturday, December 21, 2019, at 2 PM in Korsmo Funeral Chapel. Burial will be in St. Joseph’s Catholic Cemetery, Moorhead. (Korsmo Funeral Service, Moorhead, MN)

The family of Debora A. Anderson created this Life Tributes page to make it easy to share your memories.