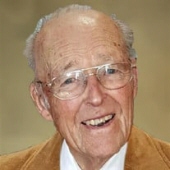 David Stanley Peterson, 96, of Fargo, ND, was welcomed into his heavenly home on Feburary 5, 2016, surrounded by his family.

David was born to Julius and Nicolina Peterson on October 24, 1919 in Fargo. He was welcomed to 1312 3rd Ave N by an older brother Roy and an older sister Jean. This home, built by his father is where he lived most of his life and fulfilled his desire to stay in that home until he was called to his heavenly home.

Dave graduated from Fargo Central High School. Growing up he worked at Vic's Market, WW Wallwork and learned the construction trade from his father. His military service began with the National Guard and from 1941-1945 he served in England and Casablanca with the Air Transport Command's North African Division.

Upon returning to Fargo he joined his father in the cement contracting business, pouring city sidewalks and building rental homes. Many of these sidewalks can still be walked on around Fargo, testifying to the excellent quality of his work. To fully utilize his equipment and time he did snow removal during winter months.

Dave met the love of his life, Mary Lou Green, from Sabin, MN, and they were married on October 21, 1950. Mary's dad told Dave, "you marry the whole family" and this has proven true through the generations of Dave's family. The LORD blessed their union with three daughters, Cheryl Peterson, Fargo, Kathy (Myron) Martinson, Moorhead,, MN, and Shirley (Harold) Ueland, Fargo, who, by God's grace came to know, love and trust the LORD Jesus Christ as their Savior. Over the sixty-five years of their marriage God has blessed them with twenty-one grandchildren and twenty-seven great grandchildren whom Dave had prayed for, that each one would come to know, trust and love the LORD Jesus.

Dave was a faithful member and longtime servant at Calvary Baptist Church, often repairing/fixing what others would replace.

In lieu of flowers, memorials may be sent to Calvary Church at Village Green, New Tribes Missions or the Salvation Army.

A Visitation for David will be Sunday from 3 PM to 5 PM, in Korsmo Funeral Chapel, Moorhead.

His Funeral Service will be Monday, February 8, 2016, at 11 AM, in Calvary Church at Village Green, Moorhead.

Burial will take place in Riverside Cemetery in Fargo.

To order memorial trees or send flowers to the family in memory of David Peterson, please visit our flower store.