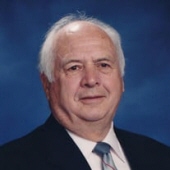 Darryl, the son of Alvin and Edna Jane "Jennie" (Cook) Dickelman, was born Feb. 5, 1927, in Sioux Falls, SD. As a very young child he moved with his family to Sabin. He received his education in Comstock, MN. He served his country in the US Navy during World War II.

On June 5, 1948, Darryl was united in marriage to Eunice Buth, in Sabin, MN. They made their home in Sabin, and later moved into Moorhead. He worked in the Coca Cola bottling plant in Moorhead, and as an insurance agent for Woodman Accident and Life Insurance Company. In retirement he worked at Eventide Lutheran Home, as groundskeeper and custodian.

Darryl volunteered for 25 years, at the Eventide "Bank". He continued that tradition of service for more than 20 years, as the unofficial convenience store and bank in Parkview apartments. Darryl was active in his church, and was a charter member of the Sabin Lions Club. Each fall, he enjoyed time spent at the deer camp near Park Rapids, MN, with family and friends.

Eunice and Darryl found great joy in time spent at their lake home on Lake Seven near Vergas, MN. Whether working around the cabin, entertaining, or fishing, they were at their best when at the lake, surrounded by family.

His wife, Eunice, preceded him in death in February of 2007. He was also preceded by a son, Kevin; and his parents.

Memorials preferred to a charity of the donor's choice.

To order memorial trees or send flowers to the family in memory of Darryl Dickelman, please visit our flower store.