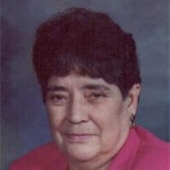 Darlene Ann Clukey was born June 23, 1937, in White Earth, MN, to Irvin and Nora (LaChapelle) Clukey. She attended school in White Earth and Waubun, MN. After school, she moved to Fargo, ND, and worked various jobs.

On August 11, 1956, Darlene married Delano W. Priem in White Earth. The couple lived in several different states where Delano was employed as a mason. In 1979, they moved to Moorhead, MN, and Darlene worked in general maintenance at Moorhead State University. Her husband, Delano died on April 13, 1993, Darlene moved to Fargo in 1997.

Darlene died Wednesday, June 23, 2004, in her home, under the care of Hospice of the Red River Valley.

Darlene loved to play puzzles, UNO Attack, Solitare and Chinese Checkers. She enjoyed spending time with her family, but her greatest joy was her grandchildren.

In addition to her husband, she was preceded in death by her parents, a son, Marlyn; and a brother, Donald.

To order memorial trees or send flowers to the family in memory of Darlene Priem, please visit our flower store.