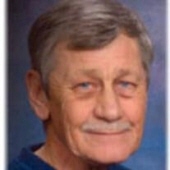 Daniel W. Schlenk was born June 2, 1947, to Harold and Molly (Dub) Schlenk, in Grafton, ND, where he was raised and attended school.

Daniel served in the US Army, during the Vietnam War, from March 12, 1968, until March 5, 1970. He returned to Park River, ND, after his discharge from the Army. He was married to Mary Greicar and they made their home in Park River where he worked as a carpenter.

Dan moved to Fargo, ND, in 1985 and began his career with Centre, Inc. He married Cathy Olson and they lived in Bismarck, ND, where he managed the Centre facility in Fort Yates, ND. He returned to Fargo in 1992.

Dan married Peggy Pickar, at Grafton, on April 16, 1999, and they made their home in Fargo. He worked for the Clay County Health Department in Moorhead, MN. They moved to Apache Junction, AZ, in December of 2003, where they lived until they returned to Fargo in June of 2011.

Dan died peacefully on Tuesday, April 3, 2012, at his home in Fargo, at sixty-four years of age.

He was preceded in death by his parents; a sister, Audrey; and a brother, Harold.

Dan loved anything that allowed him to be outdoors, whether it be hunting, fishing, or spending time on the open road on his motorcycle.

A Memorial Service, followed by full military honors, will be Monday, April 9, 2012, at 11 AM, in St. Anthony of Padua Catholic Church, Fargo.

Burial will be in Sunnyside Cemetery of rural Dazey, ND.

To order memorial trees or send flowers to the family in memory of Daniel W. Schlenk, please visit our flower store.