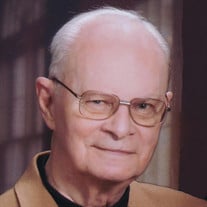 Curtis M. Moe, 90, of Fargo, ND, ended his health struggles on Tuesday, October 15, 2019, with his family at his side, at Rosewood on Broadway, Fargo. Curtis Marvin Moe, son of Clarence and Mabel (Dahl) Moe, was born March 24, 1929, in Grafton, ND, where he grew up and graduated from high school in 1947. He participated in several musical groups in school, church and community. He was active in Boy Scouts and in Air Scouts, where he received the Air Scouts “Ace” badge, being only the 28th scout in the nation to receive this distinction, at the time. Curtis attended Concordia College, Moorhead, MN, for a year, and was a member of the concert band. He enlisted in the US Air Force. While in the Air Force, he married Pat Seestadt, and they were blessed with a daughter, Pamila Ann. They later divorced. Curtis returned to Grafton, where he met Malvina Berntson. They were married June 21, 1952. They made their home in Fargo, where Curt worked as an accountant for Northern States Power Company. After 35 years, he retired in 1987. Curtis was a member of the Lions Club in Fargo and was a very active member of Pontoppidan Lutheran Church, Fargo, where he served on many boards and committees and sang in the church choir for more than 40 years. He volunteered many hours at Oak Grove Lutheran School. He enjoyed boating and fishing, especially on Leech Lake in central Minnesota. The couple spent several winters with friends in Palm Springs, CA. Curtis is survived by his wife of more than 67 years, Malvina, Fargo; a daughter, Pamila (Bob) Ward, Maplewood, MN; a son, Philip (Jolene) Moe, Sioux Falls, SD; three grandchildren, Lisa (Jesse) Young, Kristin (Corby) Heyne, and Daniel Moe; five great-grandchildren; and several nieces and nephews. He was preceded in death by his parents; his brother, Clayton; and a sister, Merlene Livestad. Memorials are preferred to Pontoppidan Lutheran Church. Visitation for Curtis Moe will be Friday, 5 PM until 7 PM, with a prayer service at 7, in Korsmo Funeral Chapel, Moorhead. His funeral service will be Saturday, October 19, 2019, at 2 PM, in Pontoppidan Lutheran Church, 309 4th Street North, Fargo. He will be buried in Sunset Memorial Gardens, Fargo. (Korsmo Funeral Service, Moorhead, MN)

Curtis M. Moe, 90, of Fargo, ND, ended his health struggles on Tuesday, October 15, 2019, with his family at his side, at Rosewood on Broadway, Fargo. Curtis Marvin Moe, son of Clarence and Mabel (Dahl) Moe, was born March 24, 1929, in Grafton,... View Obituary & Service Information

The family of Curtis Moe created this Life Tributes page to make it easy to share your memories.

Send flowers to the Moe family.