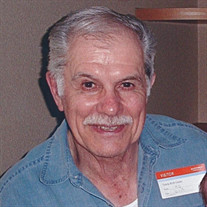 Clifford W. Stenger, 89, Moorhead, MN, died Monday, November 16, 2020, in Sanford Medical Center, Fargo, ND. Clifford William Stenger was born August 14, 1931, in Bertha, MN, to Edward and Mary (Wisnwskie) Stenger. He attended school and graduated in Eagle Bend, MN. After school he worked for area farmers before being drafted into the United States Army. He served overseas during the Korean Conflict. Upon returning home, he was united in marriage to Therese Anderson on August 10, 1957, in St. Joseph Catholic Church, Moorhead. Early in his working career, Cliff worked for Wech Chemical along with building homes for a local construction company. He later started with Watkins and worked as a door to door salesman for several years. Cliff retired from the United States Postal Service after 18 years as a mail carrier. During retirement, Cliff and Therese loved traveling on bus tours throughout the U.S. Their adventures took them to Alaska, Nashville, Branson, Missouri and Niagara Falls. They also enjoyed the occasional casino trip to Laughlin, NV, visiting family and friends. Cliff was an outdoorsman at heart. He taught his sons, Paul and Joe, the love for fishing and hunting. They went on family fishing trips to Canada and backpacking trips to the BWCA in Ely, MN. Cliff also enjoyed tending to his large garden with his wife Therese. Cliff is survived by his wife of 63 years, Therese Stenger; their two sons, Paul (Cathleen) Stenger and Joe (Holly) Stenger; five grandchildren, Amber (Brandon) Petersen, Rachel Stenger, Chelsey Moen, Vanessa (Terry) Stenger, and Dalton Stenger; along with eight great-grandchildren. In addition, he is survived by his siblings, Floyd Stenger, Diane (Delbert) Greenwaldt, John (Mary) Stenger, Gladys (Rick) Knudson and one sister-in-law, Pat (Bob) Tammen. He was preceded in death by his parents, one great-grandchild, Merik Peterson and one sister, Shirley (Don) Glende. Mass of Christian Burial will be held Saturday, June 5, 2021, at 11AM in St. Francis de Sales Catholic Church, Moorhead. Interment will be in St. Joseph's Catholic Cemetery in Moorhead. A livestream link will be available closer to the date.

The family of Clifford W. Stenger created this Life Tributes page to make it easy to share your memories.

Send flowers to the Stenger family.