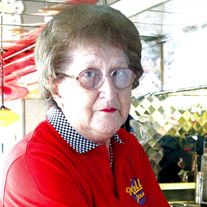 Clara Hedin, age 88, of Moorhead, MN, died Thursday evening. January 28, 2016, in Eventide on Eighth, Moorhead. She will be missed by so many people as she touched many lives. Her personality was so spunky and she was always a lot of fun to be around. Clara was born on August 12, 1927, in Hague Township, near Strasburg ND, the daughter of Sebastian and Eva (Senger) Schmidt. She attended the local country school and later the Strasburg school through grade 11. Throughout her childhood she carried many responsibilities on the family farm and particularly enjoyed working with and caring for the horses. Later she was able to attend business school in Aberdeen, SD. In 1952, she moved to Fargo, ND, and began working at the Bison Restaurant and the National T store. She then managed the F-M Stamp and later the Gold Bond Stamp Redemption Center. In 1979, she started working at St. Luke’s Hospital hospitality shop and later in dietary until her retirement, at one point being recognized as employee of the year. For many years after retirement, she represented Kroll’s Diner, making television commercials, conducting radio interviews, and hosting special events. She enjoyed spending time traveling, playing BINGO, playing cards, Polka music, and entertaining the crowd. She was a member of the Eagles Auxiliary and Catholic Daughters. In 1952, Clara met Leo Hedin on a blind date arranged by her brother. They were married in 1954, and moved from Fargo to Moorhead in 1964, where they raised four daughters, Loretta (Lowell) of Fergus Falls, MN, Deborah (Howard) of Kent, MN, Diane (Paul) of Champlin, MN, and Mary (Dan) of Maple Grove, MN. Clara has twelve grandchildren, Richard, Michael, David, Jessica, Jonathan, Amy, Allison, Katie, Claire, Erin, Lee, and Dana; and two great-grandchildren, Kamryn and Kaiya. She was preceded in death by her husband, Leo; her parents; and her siblings, Barbara, Alice, Frank, Michael, Ralph, and Rosemary. Visitation will be Thursday, February 4, 2016, in St. Francis de Sales Catholic Church, Moorhead, from 4 to 6 PM, with a prayer service at 6 PM. Funeral Mass will be Friday February 5, 2016, in St. Francis de Sales Catholic Church at 11 AM with a luncheon to follow. A private burial in Ft. Snelling National Cemetery, Minneapolis, MN, will occur at a later date.

Clara Hedin, age 88, of Moorhead, MN, died Thursday evening. January 28, 2016, in Eventide on Eighth, Moorhead. She will be missed by so many people as she touched many lives. Her personality was so spunky and she was always a lot of fun to... View Obituary & Service Information

The family of Clara Hedin created this Life Tributes page to make it easy to share your memories.

Send flowers to the Hedin family.