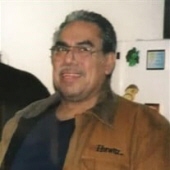 Cecilio Reyes, 70, of Moorhead, MN, died on Wednesday, November 21, 2018, in his home under the care of Hospice of the Red River Valley.

Cecilio was born on November 22, 1947, in El Campo, TX, the son of Epifanio and Hermenegilda (Limon) Reyes. He received his education through the 7th grade and later earned his GED. Cecilio then studied auto mechanics and body repair at Moorhead Tech School.

On November 25, 1966, he married to Angelita Gonzales. Over the years he worked as a mechanic, a semi truck driver, and at American Crystal Sugar. He also served in the U.S. Army. Cecilio made his home with his family in Moorhead throughout the years.

He will be forever remembered by his wife, Angelita; his two daughters, Esmeralda and Elvia;
his four sons, Cecil Jr, Ruben, Alfredo, and Jose; several grandchildren; his twelve brothers and sisters, and many nieces and nephews.

A Gathering of Friends for Cecilio will be Friday from 2 PM to 4 PM with a Prayer Service at 4 PM, in Korsmo Funeral Chapel, Moorhead.

To order memorial trees or send flowers to the family in memory of Cecilio Reyes, please visit our flower store.