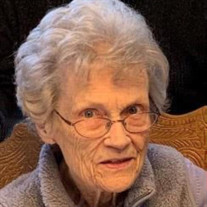 Betty Clements McGrew Kienenberger passed away Friday, May 15, 2020, in Touchmark at Harwood Groves, Fargo, ND, at the age of 97. Betty “Tish” was born on December 26, 1922, in Minneapolis, MN, to Charles and Myrtle Clements. The family lived in Marine on St. Croix, MN, before moving to Bayport, MN. Betty graduated from Stillwater (MN) High School in 1940, and was a summer camp counselor at Camp Lakamaga. Upon graduating from Winona State University in 1944, she began teaching. In November of 1944. She married Lt. Mac “Maury” McGrew. They moved to Livorno, Italy, where Mac was stationed with the Army of Occupation. Upon returning to Minnesota, they lived on the Willow River near Hudson, WI, and Betty taught school in Bayport. Later moves included: Stillwater, Spokane, WA, Brainerd, MN, Moorhead, MN, and Fargo. Betty was a member of the Friends of the Library, the American Association of University Women, St. John’s Episcopal Church, and Minnesota Federation of Weavers. In 1965, she returned to teaching at MSU Campus School, and later at Lincoln Elementary, both in Moorhead. On July 3, 1974, she married Wayne Kienenberger, in Lisbon, ND, and soon moved to Lisbon. There she was employed for 12 years as an activity therapist at the Veteran’s Home. While residing in Lisbon, she enjoyed serving as President of the Library Board, at the Food Pantry, as a Sunday School teacher, in Circle Group, Study Club, Ransom County Historical Board, and as a member of the Sodbuster’s Association. She served as a columnist, reporter and proofreader at the Ransom County Gazette well into her 80s. (She is correcting my grammar right now, I just know it.) Betty was survived by her brother, Charles Clements; her children, Mark (Lana Crowley) McGrew, Kevin (Diane) McGrew, Kris (James) Christison; grandchildren, Spencer, Mac, Chris, Beth, Brit, Jonna, David, Julie, Kurtis, and Kellie; and 23 great-grandchildren. She was preceded in death by her parents; her brother, Keith; her sister, Barbara; and stepdaughter, Kaye Louden. Due to current restrictions, there will be no services. There will be a private gathering in the future. Memorials can be sent to a conservation group of your choice, or a BackPack Food Program for school children in your area. Arrangements by Korsmo Funeral Service, Moorhead.

The family of Betty Kienenberger created this Life Tributes page to make it easy to share your memories.

Send flowers to the Kienenberger family.