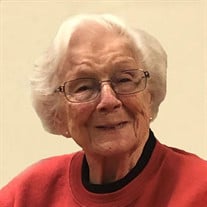 Bernice A. Whaley, age 90, of Moorhead, MN, passed away March 10, 2020, while in the care of the Hospice House, Sanford Hospital, Fargo, ND. She was a wonderful mother and grandmother. Bernice Jacob was born October 23, 1929, in Ellisville, MO, to Theodore and Tracy (Buth) Jacob. While Bernice was still a young girl the family moved to the rural Sabin, MN, area, where she attended school. Bernice was united in marriage to Vernon Whaley on October 21, 1949. The couple made their home in the Fargo/Moorhead area before putting down roots in Glyndon, MN, and the Cormorant Lakes area of Minnesota, where they raised three children. They eventually found their way back to Moorhead, where they resided for the past 30 years. Bernice worked many jobs over the years, including cooking and serving lunches for the Glyndon and Moorhead school districts, cleaning homes and resort cabins, and waitressing. Along with her husband, Vernon, they operated an upholstery business ~~recovering furniture, boat seats, and pretty much anything that was in need. The couple also created and sold many crafts over the years. Bernice loved spending time with her family and friends and had the ability to make anyplace “home.” Cooking large and delicious meals at family gatherings was one of the things she enjoyed the most. Spending weekends at the lakes was also a favorite past time. The family owned several cabins over the years, building some while remodeling others. An old school bus was even repurposed! Bernice enjoyed working on all of these projects, and ensured they were all warm, welcoming, and full of great memories for all who visited. Bernice is survived by her children, Steven (Cindy) Whaley, Fargo, Debbie (Bob) Kuehl, Dilworth, MN, and Gary Whaley, Fargo; grandsons Brian (Laurie) Kuehl, Moorhead, and Kevin Kuehl, Dilworth, with his fiancée, Heather Langer, and her son Carter; and she was affectionately known as “Grandma Neece” to five step-great grandchildren, Eve, Serenity, Hailey, Skyla, and August. Her husband, Vernon, died in 2011. In addition, she is preceded in death by her parents; brothers, Cliff and Kenny; and sisters, Patsy, Clara Belle, and Shirley Ann. The visitation for Bernice Whaley will be Monday, 5 PM until 7 PM, in Korsmo Funeral Chapel, Moorhead. Her funeral will be Tuesday, March 17, 2020, at 1 PM, also in Korsmo Funeral Chapel.

Bernice A. Whaley, age 90, of Moorhead, MN, passed away March 10, 2020, while in the care of the Hospice House, Sanford Hospital, Fargo, ND. She was a wonderful mother and grandmother. Bernice Jacob was born October 23, 1929, in Ellisville,... View Obituary & Service Information

The family of Bernice Whaley created this Life Tributes page to make it easy to share your memories.

Send flowers to the Whaley family.