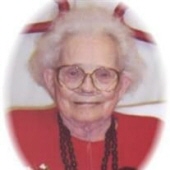 Beatrice Clarice Ulland was born April 26, 1919, to Edward and Julia (Fiskum) Ulland, in Mayville, ND. She grew up in Fargo, ND, and graduated from Fargo Central High School. On March 30, 1940, she married Adolph J. Bruckner in Moorhead, MN, where they made their home. Beatrice worked as a nursing assistant at Dakota Hospital, Fargo.

Beatrice enjoyed animals, and playing canasta and checkers. She made and sold lefse and was an excellent quilter, winning second place at the Cass County Fair for a quilt she made. She loved to eat ice cream and her grandchildren have many fond memories of eating ice cream cones with her while sitting on the porch.

Including her husband, she was preceded in death by her parents, three brothers, and four sisters.

To order memorial trees or send flowers to the family in memory of Beatrice Bruckner, please visit our flower store.