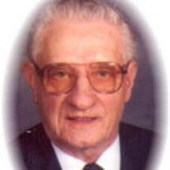 Arnold Ordean Mjones was born December 14, 1923, to Ole and Anna (Kragnes) Mjones, on a farm near Hendrum, MN, where he was raised and attended school. In the summer of 1944, he entered the military service and served as an infantryman in General George Pattons 3rd Army in WW II. Arnold was discharged from the service in 1946 and thereafter was employed at various automobile wholesale firms in Fargo, ND. Arnold later worked at the Moorhead Post Office for approximately fifteen years.
Arnold was united in marriage to LaVerna Moore on June 28, 1952, in Fergus Falls, MN, and they made their home in Moorhead, MN. Arnold loved conversing with friends and relatives. He was a life member of the Moorhead VFW and took an active interest in world events. He enjoyed fishing, hunting, bowling, reading and politics. He followed the stock market closely and did income tax preparation for many years. In his younger years, Arnold enjoyed playing softball. In his later years, he followed all sorts of sports activities, especially his grandchildren's sporting events. He and LaVerna enjoyed travelling and went to visit relatives in Norway four times.
With his family by his side, Arnold went to be with his Lord on Tuesday, May 18, 2004, while a resident at Bethany Homes, Fargo. He was eighty years of age. The Mjones family wishes to thank Hospice, the pastors, doctors, medical staff and caregivers at Bethany Homes for their wonderful work, prayers and support during Arnold's struggle with dementia.
Arnold is lovingly survived by his wife, LaVerna; four children, Roger (Lori), Rick (Marilyn), Linda (Dan) Kostich and Sandra (Brian) Torgerson; and ten grandchildren: Kara Mjones, Mathew Mjones, Zachary Mjones, Adam Torgerson, Shawn Kostich, Nicholas Mjones, Ross Torgerson, Rachel Mjones, Blake Kostich and Emily Mjones. They all reside in Moorhead. Arnold was preceded in death by his parents, seven brothers and four sisters.
Visitation for Arnold will be Sunday, May 23, 2004, from 5 - 7 PM, with a prayer service at 6 PM, in Korsmo Funeral Chapel, Moorhead. The funeral will be Monday, May 24, 2004, at 11 AM, in Triumph Lutheran Brethren Church, Moorhead. Burial, with full military honors, will be at Moorhead Memorial Gardens.

To order memorial trees or send flowers to the family in memory of Arnold O. Mjones, please visit our flower store.