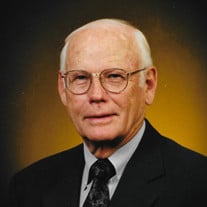 Arlan Roger Torgrimson was born at home July 27, 1930, the son of Theodore and Clara (Thompson) Torgrimson, in Fergus Falls, MN. He graduated from Ashby High School in 1948 and then served in the United States Marine Corps in Korea. On December 5, 1951, he was united in marriage to Lillian Haga. They lived in Morehead City, NC, until his discharge from the Marines, and then moved to Moorhead, MN, where they established their home and raised their family. Arlan worked for the telephone company for thirty-one years and then for Barrett Transportation for twelve years before retiring. He enjoyed golfing, where he achieved three holes-in-one, traveling, spending many winters in Arizona and dancing. Arlan and Lillian also restored two Model A Cars, which they enjoyed taking to many car shows and parades. Arlan passed away on Wednesday, January 13, 2021, in Farmstead Memory Care in Moorhead at the age of 90. Arlan is survived by his wife of 69 years, Lillian; daughters, Lorna (Brian) Bernstrom, Cheryl (Tom) Boyle. and Julie (Larry) Marxen; daughter-in-law, Mary Anne Torgrimson; six grandchildren; and eleven great-grandchildren. He was preceded in death by his parents; son, Dean; twin brothers, Lloyd and Lyle; brother, Ray; and sister, Clarice. Arlan was a very gentle man and was liked by all who knew him. He will be greatly missed by his family and friends. His family would like to give a special thanks to the staff at Farmstead Memory Care and Hospice. In lieu of flowers, memorials may be directed to Alzheimer’s Association of Minnesota, 7900 West 78th Street, Edina, MN, 55439, or to Eventide Lutheran Home. A Private Family Service for Arlan will be Tuesday, January 19, 2021, in Korsmo Funeral Chapel, Moorhead, MN. Burial, with full military honors, will take place in Evergreen Memorial Cemetery, Moorhead. To watch the recorded service for Arlan, please follow this link: https://portal.midweststreams.com/services/watch/uyTar2844Y

Arlan Roger Torgrimson was born at home July 27, 1930, the son of Theodore and Clara (Thompson) Torgrimson, in Fergus Falls, MN. He graduated from Ashby High School in 1948 and then served in the United States Marine Corps in Korea. On December... View Obituary & Service Information

The family of Arlan R. Torgrimson created this Life Tributes page to make it easy to share your memories.

Send flowers to the Torgrimson family.