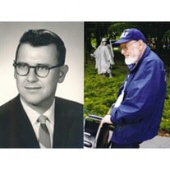 Anton, the son of Floyd and Gertrude (Jacobsen) Whitehead, was born May 10, 1936, in Phoenix, AZ. As a boy, his family moved often during the depression. He moved with his mother to Luverne, ND, St. Paul, MN, and to Fargo, ND, where he graduated from Fargo Central High School in 1955.

Anton worked at the FM Hotel in Moorhead, MN, until 1954, when he entered the US Air Force. In April of 1959, he was married to Celeste Giere. Together they had two sons. Celeste died in 1961 in an auto accident. Anton continued in the Air Force until 1964, when he was discharged as a disabled veteran.

After his discharge, Anton attended and graduated from NDSU. He taught high school in Ashely and Mandan, both ND. He also worked as a historian and a parks planners for the North Dakota State Parks. In 1978, Anton moved to California, where he served as the executive director of a non-profit association. In 1990, he retired and moved to a farm near Halstad, MN. He became the city clerk for Hendrum, MN, and retired for a second time in 1998. He spent summers on the farm, and wintered in Apache Junction, AZ. In 2004, he moved to Moorhead. He volunteered thousands of hours for a number of local organizations. He was especially proud to serve as a volunteer at the Fargo VA Hospital, as he sought to give back to this organization, the doctors, nurses, staff, and fellow veterans, who had done so much for him over the years.

A memorial service for Anton will be held on Tuesday, August 15, 2017, at 11 AM in the chapel of Lutheran Church of the Good Shepherd, Moorhead, followed by a time of fellowship with Anton's family.

To order memorial trees or send flowers to the family in memory of Anton L. Whitehead, please visit our flower store.