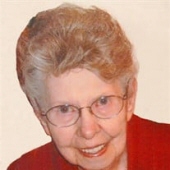 Anne Adeline Larson was born April 17, 1928, to John and Thea (Kosen) Larson on a farm near Averill, MN. She was baptized in the Lutheran faith and confirmed at Concordia Lutheran Church. She attended elementary school in Averill, and graduated from Glyndon High School as class valedictorian.

She met the love of her life, John Gunderson, at the Glyndon High School fall carnival when he came to the area to pick potatoes prior to joining the Army. He served in both the Philippines and New Guinea. Anne's father said 'I give it a year,' she would say with a twinkle in her eye. Instead, they had nearly fifty-seven years together. They were married June 29, 1946, in Moorhead, MN. They made their home in Moorhead where they raised their four children, until John retired from the Moorhead Power Plant. Anne's children recall riding in the car with their parents, who sat so close together you could not get a butter knife in between them. They were truly in love. Anne took the kids to the lake to swim, even though she was terribly afraid of the water. They moved to the farm they bought at Clitherall, MN, and remained there for over twenty years until John's death in 2003. Anne then moved to her home in north Moorhead, where she lived for nine years until she moved to Bethany on University, Fargo, in 2013.

During her early married years, Anne walked two miles to work to candle eggs for 10 cents an hour. She worked at the lunch counter in the Red Owl grocery in Moorhead, and she and John both worked as hired help for a local farmer. Then the children started coming and she was a housewife for a number of years. Her favorite job was working at the Harbor School where the students would all grin from ear to ear because 'Annie' came to work that day.

Anne was always sewing on her machine late into the night - making the only 2-3 dresses that her girls had for the year and pants and shirts for her son during the early years of her married life. She made numerous embroidery projects including hardanger. Anne also loved to crochet, and ended up donating many of her projects to New Life Center. She was an avid gardener, and you knew it was fall because of the odor of stewed tomatoes in the kitchen preparing for canning. She baked homemade bread and rolls and was known for her famous fried chicken and coleslaw.

She became creative with painting projects - which included rosemaling and whimsical art. All the grandchildren were given paintbrushes and water and told to decorate the sidewalk - getting puzzled that their art was gone when the sun dried it up! She was famous for having the grandchildren take the acrylic paint to make their painted rock masterpieces - each of which was given a place of honor in her many flower beds. She loved to watch the beauty pageants and had her kids pealing with laughter with her wicked quips about each contestant.

Anne is survived by her four children, Linda Phillips, Sharon Gunderson, Steven Gunderson, and Joan (Tim) Pedersen, all of Moorhead; one brother, Norman Larson of Crystal, MN; twelve grandchildren, Stephanie (Dave) Eng, Sarah Phillips, Steven (Samantha) Gunderson Jr, Rachel (Andy) Kinneberg, Faith Alessi, Hannah (Ethan) Curtis, Clara Alessi, Andrea Erickson, Grace (John) Norton, Austin Erickson, Bo (Jamie) Nobozny, and Jonathan Erickson. She was also blessed to have eleven great-grandchildren, one great-great grandchild, and excited to know that another great-great grandchild was on the way. She is also survived by numerous nieces, nephews and their children in the United States, and many relatives from her Pervig family at Trondheim Norway.

Anne was preceded in death by her husband, John, of almost fifty-seven years; her parents; and her brothers, Elmer, Melvin 'Buddy', and Clifford Larson.

'For everything there is a season...' and such are the celebration of the seasons of our mother and grandmother.

Visitation for Anne will begin at 12 PM, followed by a funeral at 1 PM, Monday, January 5, 2015, in Korsmo Funeral Chapel, Moorhead. Burial will take place in Riverside Cemetery, Moorhead.

To order memorial trees or send flowers to the family in memory of Anne Gunderson, please visit our flower store.