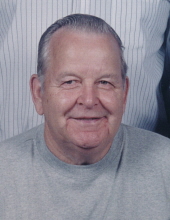 Allen Laverne Otterson was born February 11, 1927, the son of Edward and Myrtle (Gram) Otterson, on a farm near Kindred, ND. He was raised there and attended school before entering the U.S. Army serving during WWII. After the war he returned to Breckenridge, MN, and began working for the railroad.

On June 23, 1949, Allen was united in marriage to Dolores Edlund in Wolverton, MN. They lived in Wolverton and Breckenridge before settling in Moorhead where he worked for the City of Moorhead Street Department as Machine Operator for 25 years. Allen also worked for American Crystal Sugar piling sugar beets in the Moorhead yard for 20 years. Dolores passed away April 8, 1998, and he has continued to make his home in Moorhead.

Allen was a member of the American Legion in Moorhead.

He enjoyed carpentry work and built a number of homes over the years. He also enjoyed spending time at the lake, gardening, canning, bird watching and deer hunting.

He was preceded in death by his parents; wife, Dolores; sons, Dale and James; sisters, Loyce Overland, Burnette Otterson and Magnald Berrry; and brothers, Oral, Marvin and Ralph.

A Visitation for Allen will begin at 1:00 PM, Tuesday, March 29, 2022. followed by his Funeral Service at 2:00 PM, in Korsmo Funeral Chapel, Moorhead. Burial will take place in Moorhead Memorial Gardens, Moorhead.


To order memorial trees or send flowers to the family in memory of Allen L. Otterson, please visit our flower store.